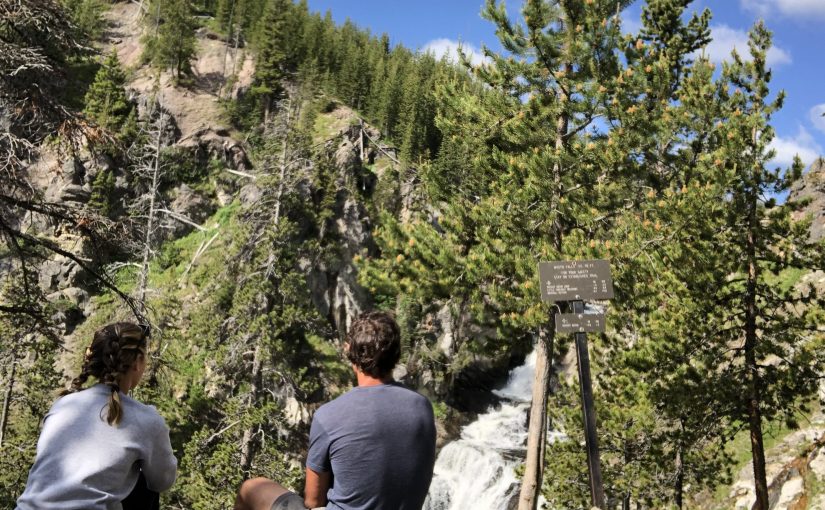 And the road trip continues!

If you missed my last blog, check it out HERE.

The trick to getting a good camp spot in the National Parks is to GET THERE EARLY! Living in Northern Michigan, we are part of the Eastern Time Zone; So one of the perks of traveling out west is the time change. Waking up at 6am is more like 8am at home…so it’s kinda like sleeping in, am I right? Not only does waking up early help with getting a good camp spot, but being able to see the sunrise in the mountains is pretty beautiful too!

Kwin and I were both very excited to be going into the Tetons! Of all the parks, this was the one that most people told us would be our favorite.

-We’d heard it was less crowded

-There were mountains everywhere

-And there would be lots of hiking, biking and paddling

Our morning started out again at the cute coffee shop in Jackson, Cowboy Coffee, and then we hit the road! Pulling into Signal Mountain Campground promptly around 7:30am with a train of other campers having the same intentions as us. Luckily, we were able to snag the BEST spot in the campground [well in our opinion at least] right on Jackson Lake.

After setting up camp we decided to do hike Taggart Lake Trail: a 3-mile, rated easy hike, but with spectacular views! We both agreed that it was one of our favorite hikes in the park.

In the afternoon we did a nice long paddle across Jackson Lake using our inflatable Tahoe SUP paddle boards, and let me tell you …it felt like we were paddling with a green screen in-front of us! I mean just look at those mountains, plus the crystal clear blue water!

Funny story, Kwin and I set up the tent while cooking dinner because we thought it would be fun to sleep under the stars. We didn’t put the rain fly on, that way we would be able to see the stars while going to sleep. Before bed we both wanted to do some reading, so we sat in the camper …. and well we both fell asleep! Around 12am we woke up to the sound of torrential downpour rain! We were dry …. but our tent, sleeping bags and other camping gear wasn’t.

Once the rain stopped, around 8am we got coffee at the Signal Mountain campground store and then hit the road to our first hike of the day. Grand View Point Trail: a 5-mile, moderate ranked trail, that definitely fit its name perfectly! The trail at the beginning was pretty wet, thanks to the rain from the night before, so the mosquitoes were bad! However, once we got up to a higher elevation they seemed to disappear. The top of the trail had a beautiful view of Jackson Lake, along with the Tetons in the background! Again, I felt like I was looking at a green screen!

Our second hike of the day was definitely more busy than the first, Jenny Lake Trail. Despite there being a lot of people, it was still a really nice hike! About 7 miles in length, and I would rate as Easy.

I mentioned this before about getting to campsites early if you want to get a spot in the National Parks. Another helpful thing is this website here: https://www.nps.gov/index.htm it’s a great source of information regarding camping, or really anything in the National Parks. There is an area that lets you know when the campgrounds in the parks had been filling.

Our number 1 campground choice was Norris Campground, due to its central location. We saw that Norris Campground was usually full by 9:30am…so we got there at 7:30! After two hours of waiting we finally got a spot, set up camp, and then went for a nice bike/hike to Norris Geyser Basin (about 1 mile from our campground!) FUN FACT: one of the largest Geysers in Yellowstone is found at Norris Geyser Basin- Steamboat Geyser– and it erupts every 4-8 days apparently. While we were standing in line waiting for a campsite, it started steaming and showing an increase in its activity. The ranger pointed it out to us all, and said it was due for an eruption! Unfortunately, it didn’t erupt while we were there…but it was really cool to see the activity of Steamboat! After a quick hike we drove out of the park to Gandier, MT to meet up with Megan and Tommy- Kwin’s sister and our brother-in-law! We got groceries for the next couple of days, then went back to the campground and did the same hike we had already done, that way Megan and Tommy could warm up their legs for the upcoming days! Megan and Tommy were planning to stay with us for the remainder of our trip!

Alright guys, not only do you need to wake up early to get a good campsite….but while in any National Park you’ve also gotta wake up early to get to the most popular hikes! We had heard horror stories before going to Yellowstone, saying there could be thousands of people standing around ONE SINGLE GEYSER! I don’t know about you, but that sounds like a recipe for claustrophobia to me! With this being said, we decided to get to one of the most popular geysers in the park, ‘Old Faithful,’ bright and early! This geyser is the most predictable of all the geysers in Yellowstone, and erupts about every 60-90minutes. I can’t compare the eruption to anything else, because it’s the only geyser we saw actually erupt, but it was pretty cool in my opinion! It shot up about 50-75ft in the air and lasted about 5 minutes. We were very fortunate to be there with only thirty or so people [compared to the thousands that can be there later in the day!]

After that we went to probably our favorite hike in all of Yellowstone! The Mystic Falls & Geyser Basin: a 3.5-mile, moderately ranked hike WITH AMAZING VIEWS! It’s about two miles away from the ‘Old Faithful Geyser Basin,’ so when we hiked to the overlook point we were actually able to see all the geysers there! If you look closely in the picture below you can see all the steam coming up from the different geysers! As the name says, there was a waterfall as well: Mystic Falls. All of us really enjoyed this hike for the views, the waterfall and also the bring blue/sapphire colors of the geysers were pretty awesome!

We managed to get in another hike this day and did a highly recommended hike Mt.Washburn. This was a 7-miles, moderately ranked hike that ended on top of a mountain overlooking the entire park! In-fact a functioning firetower was at the top. For those who don’t know what that is, a park ranger lives in this fire-tower, which was built in the early 1900’s, from June through October and is constantly monitoring for forest fires!

Our last day in Yellowstone! Our first stop was the ‘Grand Canyon of Yellowstone.’ Now I’ve never actually been to the Grand Canyon, so I can’t really compare it to anything, but man was this beautiful! There were two waterfalls- The Upper and Lower Falls- and then beautiful rock formations lining the actual canyon. By the time we were leaving the parking lot was nearly full-mind you this was about 8am. So get there early folks!

Our next hike of the day was a “spur of the moment” hike called Elephant Back Mountain Trail. This hike was about 3.5-miles, most of which was uphill! Kwin and I really enjoyed this because we could “feel the burn,” and once you finally got to the top you had a beautiful view of Yellowstone Lake.

We ended the day by biking the ‘Osprey Falls’ trail- it’s one of the only bike friendly trails in the park- and then got dinner with Megan and Tommy in Gandier, MT.

If you’re planning to stay in Yellowstone, I would highly recommend going to visit this town. It’s located at the Northern entrance of the park, and has so many unique stores and restaurants! You should definitely make sure to stop in and check out Yellowstone Wildlife Galleries too. The store owner is a phenomenal wildlife photographer and has a store full of beautiful pictures!

Grand Tetons and Yellowstone National Park were truly amazing! We loved both parks for different reasons. But if I had to choose, I would definitely say that Grand Tetons was my favorite(:

I hope you’ve enjoyed this blog, and I can’t wait to share about our time in Bozeman, MT, Glacier National Park and all the stops we made while traveling home!